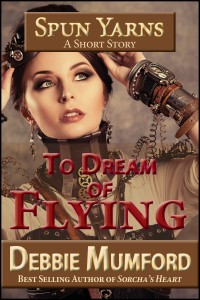 Stories often have blended starts. What if I put this together with that? What would happen? Would the result be interesting?

In the case of To Dream of Flying, I found an obscure reference to a Native American tribe of the Pacific Northwest who were rumored to be able to shapeshift … into thunderbirds! How cool is that?

Now, what if a member of that tribe was isolated, with no one to explain her abilities. Would she survive her transformation? The plot bunnies were multiplying.

Stir in the final element–what if I set the story in a steampunk world?–and Amelia Penfield of To Dream of Flying came to life!

AMELIA PENFIELD POURED TEA from a pretty rose patterned teapot, handed her father a cup, and then took a dainty sip from her own. Keeping her eyes downcast, she felt her cheeks warm, but not from the heat of the tea.

“I’m concerned, Father,” she said quietly. “I’ve been having very unusual dreams.” She paused, took another sip of tea before returning her cup to the table. Knotting her hands in her lap, she raised her eyes to meet her father’s gaze. “Of flying.”

Professor Herbert Penfield’s face drained of color, as she’d known it would. She knew the tales of her birth. Knew the circumstances that had led to her mother’s untimely death.

“Flying?” he asked, his voice choked. He cleared his throat, put aside his teacup, and leaned forward to study her. “Tell me.”

Her heart raced, throbbed in her ears as she’d heard the vast sea pound the shore in her dreams. A sound she’d never heard in life, hers having consisted of the sights and sounds of the booming—and very land-locked—city of Denver, Colorado. Closing her eyes, she sought calm. When she opened them again, she focused on her father, the solid rock of her life.

“In the dream,” she began, her voice barely more than a whisper, “I’m sitting on a cliff overlooking the ocean. At least, I suppose it to be an ocean—it’s a vast expanse of water, stretching to the horizon, with white-capped waves breaking against a sandy shore.” She paused, it was easier to puzzle about this vision of an ocean she’d never seen than to contemplate what came next. She picked up her cup, took another fortifying sip of lemon scented tea, felt the warmth slide down her throat and radiate through her body.

Replacing the cup, she continued. “Next, I rise,” she did so, “place my hands, palms together, over my head,” she fit action to words, “and then swing my arms down so that they’re straight out from my shoulders.” Acting it out, she faltered, her cheeks heating with embarrassment. She sank back to her seat on the pretty blue velvet divan.

“Yes,” encouraged her father. “Then what?” His cheeks remained pale, but excitement lit his eyes. Intellectual excitement tempered with concern.

“Why, then the inexplicable happens. I transform. Suddenly, I’m not a girl, but an enormous bird. I feel the wind pushing against my outstretched wings and I launch myself off that cliff to soar over the vastness of the ocean.” Her breath caught and she licked her lips. “You can’t imagine, Father. It’s the most amazing feeling. The freedom. The joy. The power.” She glanced at him and their gazes caught. “It’s breath-taking…and totally addictive.” She closed her eyes before whispering the final, terrifying words. “I want nothing more than to ascend the highest building and throw myself into the wind.”

Which was, of course, exactly what her poor mother had done.

Debbie Mumford specializes in fantasy and paranormal romance. She loves mythology and is especially fond of Celtic and Native American lore. She writes about faeries, dragons, and other fantasy creatures for adults as herself, and for tweens and young adults as Deb Logan.
View all posts by Debbie →
This entry was posted in Excerpts, mythology, Promotion and tagged fun with words, prompt openings, steampunk, thunderbird. Bookmark the permalink.