Prompt Openings: The Right to Vote 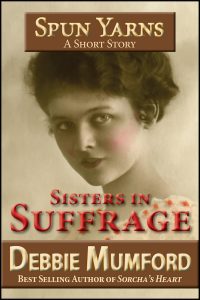 Writing this story was a departure for me since straight historical — no time travel or paranormal themes — is not my genre of choice.

I had written a blog post several years ago encouraging women voters to exercise the rights that our foremothers suffered to earn for us. I knew when I began my research for that post that my right to vote hadn’t come freely, but I hadn’t realized the extent to which “suffrage” and “suffering” were related when it came to women in the early 20th century. When I remembered that research, “Sisters in Suffrage” was born.

I hope readers will agree that this fictional tale of women’s suffrage in the United States is particularly apropos in this election year.

Here then is the opening to Sisters in Suffrage:

I WAS NINETEEN YEARS old that cold November night in 1917. Even though the world was at war, a pretty girl of good family such as myself should have been attending dances and being wooed by handsome young men. I should have been accepting my place in society as a wealthy man’s decorative bride. Never should I have been subjected to the humiliations of prison nor beatings at the hands of brutal guards.

Never should I have had the audacity to stand sentinel to my beliefs with a banner in hand in front of the White House.

I had made my choices and they had led me to a night of terror.

THOUGH MY HEART POUNDED with excitement and my mind buzzed with nervous questions, I strode confidently along the street, my navy skirt and linen petticoats swishing around my ankles, the lace of my starched white mutton-sleeved blouse brushed my chin, and a little feathered hat perched jauntily on my upswept dark hair. The air was redolent with flowers from Lafayette Park and birdsong lilted in the breeze. In short, it was a beautiful summer day in Washington, D.C.

I stopped before the stately three-story home that housed my destination, Alice Paul’s newly formed National Women’s Party. Had I done the right thing in coming here? I’d defied my father, who was even now assiduously seeking an advantageous marriage for his only daughter. I’d left his home and protection without permission. Had I made a wise choice? My heart hammered in my chest and my throat constricted. Panic near to choked me.

I closed my eyes and willed myself to calm. Too late for misgivings now. I had arrived. Opening my eyes and breathing in the sweet summer air, I studied the women who moved purposefully across the lawn and porch, who threaded in and out the ornately carved front door. Young women barely old enough to be out of short skirts, matrons who would look at home with children round their knees, and dignified matriarchs who might be holding court over large family gatherings. A full range of the feminine spectrum. My panic eased. This was where I belonged, these were my equals, my sex, but more than that, my sisters in suffrage. For we were all here for one purpose: to join Alice Paul in demanding that our government, as represented by the man who resided across

the park in the White House, hear and respect our voices.
I settled my face in what I hoped was a pleasant expression, lifted the latch on the

front gate, and stepped onto the stone pavers that led to the porch. A young woman separated herself from a group gathered around a long table and approached, her golden hair shining in the afternoon sun.

“Hello,” she said with a smile. “Are you new? I don’t believe I’ve seen you here before.”

I licked my lips and straightened my shoulders. “Yes, I’ve only just arrived from New York.” I glanced again at the women who chatted and laughed as they worked around me. “Is this the NWP?”

Her beautiful, liquid-brown eyes widened and filled with a fervent light. “Oh, yes. Have you come to join us?”

I held out my gloved hand, which she immediately clasped with paint-stained fingers. “I have. My name is Emily Tuttle, and I’ve come to stand sentinel with Alice Paul.”

Debbie Mumford specializes in fantasy and paranormal romance. She loves mythology and is especially fond of Celtic and Native American lore. She writes about faeries, dragons, and other fantasy creatures for adults as herself, and for tweens and young adults as Deb Logan.
View all posts by Debbie →
This entry was posted in Excerpts, Promotion, Writing and tagged fun with words, prompt openings, right to vote, Short story, suffrage. Bookmark the permalink.