This morning we said good-bye to the best dog in the world.

Angus MacDubh has been and always will be my personal standard for what a dog should be. We were blessed to know and love him. He was my daughter’s dog, but he came home to live with us for the last months of his life. His beloved mistress now has two small children … and toddlers weren’t the easiest match for an elderly black lab.

Good-bye, MacDubh. You will be missed. 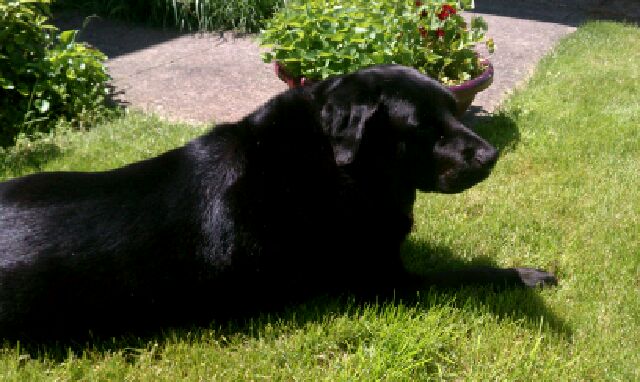 My life has been littered with dogs. Miniature Poodles who thought they were wolves; Bullmastiffs who believe they’re lap dogs. All sizes and personalities of canines have enriched my life. But the story that tugs at my heartstrings involves a black Lab who was never mine…Angus MacDubh.

Angus came into my life when he was barely old enough to leave his mother. My youngest daughter had opted to live at home that year as she trained for a career in massage therapy. Ultimately, this is her story.

A family friend announced that her purebred Lab would soon produce a litter of AKC pups, and my girl jumped at the chance to buy one of Sage’s offspring. Preparations were made, but before we’d convinced our Dalmatian, Diamond, that the addition would be a wonderful boon to her existence, the little black fur-ball had taken up residence in our home…and our hearts.

I’m not too proud to admit it; I was smitten at first sight. I’d recently enrolled in a Scots-Gaelic class, so when my darling daughter asked for name ideas, I suggested Angus MacDubh: “Angus, son of black.” She liked the rhythm and the pup acquired a name longer than himself…a very short-lived problem, I might add.

My beautiful daughter doted on her puppy-boy, and her father and I agreed that we’d never imagined a more amazing grandpuppy. I even found myself singing nonsense songs to the little rascal, much as I had done when my children were small. The only holdout in our household’s puppy love-fest was the aging Dalmatian. Diamond remained convinced the family had been just fine prior to Angus’ advent, thank you very much.

Angus, for his part, adored Diamond, but delighted in baiting the adult dog. He had his own small kennel, but would lay in wait beside Diamond’s much larger den. The moment she stirred from her blanket-strewn lair, he would charge inside with a joyous yip and seize her castle by right of possession.

His mistress enrolled him in ‘puppy kindergarten’ and diligently trained the intelligent Lab. Not to be outdone by the newcomer, Diamond soon learned to wait patiently beside her young protégé. My daughter or I would prepare their food while they sat immobile. We’d place the bowls of delectable tidbits in the expected positions, and still the dogs waited with rapt attention. Drooling, yes. Quivering, undoubtedly. But neither moved until one of us uttered the magic word:  Release!

Diamond had never suffered such indignity, but the proud Dalmatian refused to be bested by an upstart of a pup. And so, our high-energy, often out-of-control Diamond became a model dog-citizen—all because a black Lab puppy shamed her into it.

My daughter, an accomplished figure-skater, had agreed to supervise a young colleague and her brother while their parents were away on business. Since the family had a fenced backyard, Angus accompanied her on his first overnight excursion.

When the phone rang after dinner, my husband and I were unprepared for a hysterical daughter. She’d been busy chauffeuring kids to numerous activities; they’d just gotten home. Angus was not in the yard. The family’s dog reclined peacefully in the unfenced front yard, but the exuberant, joyful Angus had not been found…and the unfamiliar neighborhood backed to a busy highway!

We chivvied Diamond into the rear of our Jeep and rushed to join the search. Anxious though we were to reach our daughter, we slowed to a crawl as we approached the area, scrutinizing the shadows at the edges of the highway for a small, black, broken body. Thankfully, no such apparition appeared.

A few minutes later we wandered the unfamiliar neighborhood calling the pup’s name and shining flashlight beams into darkened corners of suburban lawns. The occasional homeowner emerged to question us, and a few gangs of preadolescents joined in what seemed to them an amusing scavenger hunt, but the search was no game to us.

My daughter berated herself with a running monologue of recent transgressions: she shouldn’t have brought Angus on this glorified baby-sitting job; she should have inspected every inch of fence line; she should have taken him with her while she ferried the kids from activity to activity; she should have left him locked inside the house…On and on until her father stopped her.

“Life happens, sweetheart. You’re a good pet owner and Angus is lucky to be your dog.” He hugged the shaking girl, smoothed her hair from her forehead, and chucked her under the chin. “We’ll find him. A year from now, this will all be a memory.”

We split up. My daughter and her young charges headed one direction, while my husband and I urged Diamond the other. The neighborhood became familiar as we wound through the streets of manicured lawns again and again. Feeling like an idiot, I sang Angus’ baby songs at the top of my lungs, hoping he’d come bounding out to play.

Diamond paid particular attention to one home. We passed it several times and each time her nose twitched, ears cocked forward, and she pulled at the leash. We checked the front yard by flashlight and walked the perimeter of the fenced backyard shining the light into every corner. No familiar puppy exuberance greeted us, but when I sang his songs, I could swear I heard muffled yips and barks. My husband strode to the front door and knocked. No one answered.

We noted the address and continued scouring the neighborhood. Those muffled cries came from somewhere and their existence eased my daughter’s fears.

Exhausted and out of options, we retreated to the kids’ home. Phone calls to the Humane Society and Angus’ vet garnered no information, but put those agencies on alert that a beloved puppy had gone missing. Unhappy and unfulfilled, we parted company with our daughter, loaded Diamond in the Jeep and drove home to a restless night of worry. Angus had never been alone before…he was only four months old…a baby cold and hungry in the wild! Never mind that it was high summer in Colorado and the Boulder suburb hardly qualified as wilderness–my imagination ran amok. My grandpuppy was lost!

The phone rang early the next morning, sending a shot of adrenaline zinging through my system. The vet called to say Angus had been found. The ordeal over, I sank into a chair and waited for my heart rate to return to its normal easy plod.

We called our daughter and arranged to meet her and her charges at the vet’s office to retrieve her puppy-boy. Once he’d been reunited with his mistress, he was coming home with us. Diamond would have charge of the recalcitrant Lab until the kids’ parents returned from their trip.

At the vet’s office, we met the family whose house Diamond had identified. The children had found Angus wandering the neighborhood and had fallen immediately in love. Who could blame them? A more adorable fur-ball has yet to grace the planet! Their parents had fed him and prepared a safe haven for him in their laundry room while the family went out for the evening. First thing the next morning, the parents had called the Humane Society with a description of the little guy.

Thank heavens the organization had been alerted to our loss. Our vet was able to verify Angus’ identity and our daughter was reunited with her precious puppy-boy.

Angus MacDubh is no longer an adorable fur-ball. He has grown into a majestic male with an indescribably luxurious coat, but he will always be the best grandpuppy in existence for this doting human. Last summer when our daughter married a career military officer in a garden ceremony, Angus accompanied her down the ‘aisle.’ My husband escorted our daughter to her soon-to-be husband, kissed her cheek, and in a symbolic gesture, handed her young warrior Angus’ leash. They were a package deal.

Debbie Mumford specializes in fantasy and paranormal romance. She loves mythology and is especially fond of Celtic and Native American lore. She writes about faeries, dragons, and other fantasy creatures for adults as herself, and for tweens and young adults as Deb Logan.
View all posts by Debbie →
This entry was posted in Critters, Family, Free Story. Bookmark the permalink.