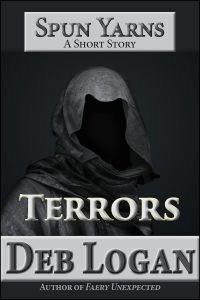 My prompt for this story was “teens overcoming adversity, evil, or ignorance and having a positive effect on their situation.”

What I created turned out to be one of my favorite young adult stories: Terrors.

It can be found  in Fiction River: Sparks, an anthology edited by the fabulous Rebecca Moesta, as well as a stand-alone, Spun Yarns tale published by WDM Publishing.

Terrors came to me full-blown. The first draft of the story flowed effortlessly from subconscious to screen, introducing me to two amazing teens. Artie, a misfit girl who knows too much, and Jed, a surprisingly stable and open-hearted boy with an indomitable desire to protect the innocent. I’m pretty sure the world hasn’t heard the last of these young heroes.

I cast my eyes down, fixing my gaze on the worn institutional tile beneath my feet, counting my heartbeats until it would be safe to look up again. The count was ingrained. A long practiced skill that no longer required my attention. Instead, my mind wandered, wondering what it would be like to unknow these denizens of the unseen world? To be a normal teen, with normal perceptions; a girl who walked this earth with no realization of what stalked her every step?

Unfortunately, that was not my life.

The count ended. I raised my eyes and glanced around quickly to reorient myself. High-ceilinged hallway, walls lined with lockers and classroom doors. Students milled around, chatted with friends, complained about their schedules. Everyone studiously avoided noticing me.

Yep. Same old invisible girl. The building might have changed, but the experience remained the same. I stepped away from the wall, pushed into the throng, and made my way to class without making eye contact with any of my peers.

I’d hoped high school would be different from middle school, that somehow, miraculously, the halls of McKinley High would be full of kids anxious to be my friends, and gloriously free of the beings that haunted my waking nightmares.

I’d been stupid of course. No such place existed.

Every single person I’d ever met considered me a freak. If truth be told, that even included my parents. And the others? The terrors? They ruled our world from the shadows, influencing our thoughts with whispered commands that were no more noticeable than the sigh of mosquito wings. Veiled suggestions of disease and despair, murmurs of treachery and disloyalty. Human souls rotted at the whim of foul creatures who fed from our life-force and lapped up our baser emotions like ice cream. No one knew of their existence, so no one guarded against their intrusions.

No one but me — and I’d learned early to hide my knowledge.

Mom and Dad had worried when my imaginary friends terrified me instead of entertaining. Other kids feared the boogieman in the closet or the monster under the bed, but were easily appeased by a nightlight or an extra bedtime story. Not me. Never me. I knew my monsters personally, recognized their reality with a sharp twist of terror in my gut.

Other kids embraced pacification, accepted that the monsters they perceived lived only in their imaginations. Not me. I learned to close my eyes, duck my head, and count the beats of my heart until the unholy creatures tired of watching me and moved on.

My parents noted my odd moments of seeming paralysis and sought psychological counseling. I developed yet another necessary life skill: I learned to lie. The doctor couldn’t explain away my certain knowledge of monsters, but I could explain away my parents’ concerns. Eventually, the adults in my life were appeased and I continued my uneasy existence, camouflaging myself from both my parents’ concern and the notice of the creatures that stalk humanity.

I wished I understood why I could see my terrors and others couldn’t. Why was I singled out to endure this curse? More than anything, I longed for a companion in this surreal world, someone to share my fears and woes … but then, would I truly wish this ungodly knowledge on another human being? Especially a person I might learn to consider a friend? I don’t know. Misery — at least mine, really would love some company.