I’m thrilled to introduce Bonnie Elizabeth, author of One Bad Wish, an absolutely wonderful young adult fairy godmother tale. But why listen to me tell you about this delightful writer when she’s ready to tell you all about herself?

Take it away, Bonnie!

Where do you live and what is your writing space like?
Currently I live in Charlotte North Carolina. I’m able to write full time so I have a regular old office with a computer and file cabinets and all the usual stuff.

And a cat. A cat who loves to site on the keyboard.

Why do you write?
Because I can’t not write. When I was working as an acupuncturist, I started blogging just so I could write. And while it might have been interesting to blog about being an acupuncturist, instead I blogged as my cat.

When did you start writing?
Probably when I was about 8 or so.

What genre(s) do you write?
Mostly fantasy and mystery and combining the two genres. Fantasy is broad for me, from other world fantasy to urban fantasy, although most published novels are currently contemporary fantasy. 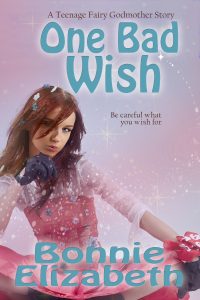 Tell us about the book you have in this bundle. How did it come to be?
I had to write a young adult short story for an anthology about wishes. It’s still to be published, but Willow Vaughn was the main character. Her voicy attitude insisted upon more stories and so here she is, in a nice little novel (and another on the way)

What is the best piece of writing advice you’ve ever been given?
That all editors have tastes and just because an editor (or dozens of editors) don’t like the work, it doesn’t mean other people won’t. Because of tastes … and that tastes change.

Tell us about your most recent book.
My most recent book is One Bad Wish (which is in the bundle) and there’s another Teenage Fairy Godmother book coming out called Sun Spot Magic. I hope to have that published in October (if all goes well!)

What are you currently working on?
I always have multiple projects going on. I’m finishing up some changes based on first reader feedback on a second Fairy Godmother book called Sun Spot Magic. I just finished an initial draft of a book based on a short story I wrote called Man in Shades of Beige. I’m looking forward to starting an SF mystery novel but by the time I finish the edits, I could be inspired by yet another project. I also want to get back to my first series, an episodic series about a town named Whisper.

Thanks, Bonnie! It’s been fun visiting with you 😀

Debbie Mumford specializes in fantasy and paranormal romance. She loves mythology and is especially fond of Celtic and Native American lore. She writes about faeries, dragons, and other fantasy creatures for adults as herself, and for tweens and young adults as Deb Logan.
View all posts by Debbie →
This entry was posted in book bundle, News, Writing and tagged Bonnie Elizabeth, Faery Tales, Fantasy, YA. Bookmark the permalink.