The final novel in my Sorcha’s Children series is still in progress, but that won’t stop me from giving you a taste of the opening as it stands now 😀 Since I’ve already decided on the title and have designed the cover, I’ll share those as well! 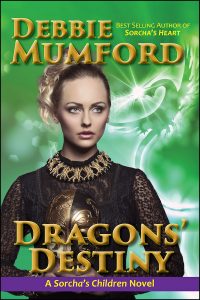 Luag sat tail curled around paws in the great gallery of the ice aerie. The great black dragon closed his eyes, basking in the cold solidity of the cavern floor, soothed by the soft susurrus of scales sliding on ice. He inhaled deeply, dragon smoke and the unique tang of glacial ice—the scents of family and home.

Content, he opened his eyes and let his gaze travel up the smoothly carved blue-gray walls to the curved dome with its sparkles of refracted light. Bright passageways led off in every directions, their rounded openings glowing with possibility. The dragons who had created this aerie had been masters of light and space. Their creation never ceased to amaze and delight Luag.

He swung his great head in a slow arc, studying his fellow dragons. So many colors—malachite, bronze, garnet, azure, and every hue in between. Such a range of sizes; from the smallest hatchling to the mightiest dragon. These were his weyr-mates. The dragons he had grown to adulthood among. If fate were kind, they were the dragons he would lead into the future. He bowed his head, fully aware of the honor the aerie did him in acknowledging him as rex-in-waiting.

He had always known and accepted his destiny. Had studied diligently and spent every moment he could find in the company of his rex. For the Rex was not simply the leader of his flight, a dragon to be admired and emulated, he was also Luag’s foster father. The male who had watched over him and his siblings since the moment their eggs had cracked. The adult who had always been there for him, whether to answer the questions of a naive fledgling, or to discuss philosophy with the adult he had become. The Rex was authority personified, but more than that, he represented all that was good and just among dragon-kind. Luag prayed to the First Egg to have a tenth of his mentor’s wisdom when the time came for him to lead the aerie.

A firm but gentle thought nudged the link in Luag’s mind. He opened immediately, welcoming his rex. You’re very quiet today, young black. Is anything amiss?

No, honored one. I’m merely thoughtful.

Luag’s head snapped up and he searched the hall for his foster father. Their gazes locked across a sea of dragon scales. Brooding, honored one? Why would you say that?

Join me on the ridge, answered the Rex. We can discuss what ails you while we sun.

Debbie Mumford specializes in fantasy and paranormal romance. She loves mythology and is especially fond of Celtic and Native American lore. She writes about faeries, dragons, and other fantasy creatures for adults as herself, and for tweens and young adults as Deb Logan.
View all posts by Debbie →
This entry was posted in Excerpts, Promotion, Writing and tagged dragons, e-books, fun with words, novel, prompt openings, Sorcha's Children, writing. Bookmark the permalink.