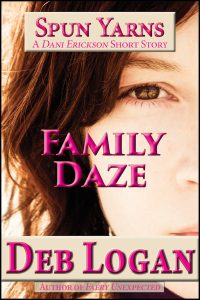 And another tale about Dani Erickson, a perfectly normal teenage girl who just happens to be a hereditary demon hunter.

Dani is the answer to her grandfather’s cherished dream – a seventh seventh. Unfortunately, since his dream was of a seventh son of a seventh son, he’s unaware that he accomplished his goal…and Dani’s not about to fess up.

I SEE DEMONS and they’re not pretty. Take the goblin hovering behind Ms. Hockinson’s chair for example: scaly, maroon skin; long filthy claws; sharp, protruding teeth; only vaguely humanoid. The nasty creature stood erect, clothed in a torn, brown tunic. His eyes, black and malevolent, glittered with intelligence, and something else, something truly disturbing … dark amusement.

A shiver of anticipation zinged along my spine. I was born to battle demons. Me. Not one of my six older brothers. I might be the youngest child and only girl, but I was also the one heredity had chosen—and this idiot had wandered onto my turf. He had no clue how dead he was. Yet.

I weighed my options while I sized up my opponent. A glance at the institutional clock clinging to the wall above the chalkboard behind Ms. Hockinson’s desk informed me that the school day would end in five minutes. Classmates squirmed in their desks, surreptitiously gathering their belongings in anticipation of the longed-for final bell.

The demon examined the class, his gaze moving from student to student while one clawed hand encircled my teacher’s throat. He smacked his lips and a long thin tongue darted between his teeth to lick Ms. Hockinson’s ear.

She cleared her throat and flicked a hand toward his face as if warding off a pesky fly.

The clock ticked nearer the hour, and then the unthinkable happened. The second hand stopped, suspending time.

Every person in the room stiffened, frozen in mid-action just like the clock. Everyone, except the demon and me. No way was I going to be stuck in Ms. Hockinson’s social studies class until the end of time! That demon was going down.

The demon grinned, and I launched my attack. Sliding out of my chair, I jumped to the top of my desk, flipped over Jeremy Brody’s head and landed in a crouch before Ms. Hockinson’s desk. On the way to standing I yanked twin stiletto blades from the concealed sheaths sewn artfully into my favorite high-top boots.

“Well, well,” said the demon. “What have we here? A human immune to the ravages of time?” He licked Ms. Hockinson’s ear again and stroked her neck. “You must wait a bit, my tasty morsel. One of your students needs my attention.”

He released my teacher and hurtled across her desk.

I skipped sideways, letting one stiletto trail across his midsection.

The stroke surprised him. He glanced at his bloodied belly, roared, and lunged.

I danced away, using my knives as I’d been trained — like a picador with a bull. Wounding him with small, precise cuts designed to sap his strength and enrage his ego.

We scuffled briefly, but silver blades and sacramental preparation gave me the edge. I leapt and rolled, bounced and twirled, and each time a hand passed his flesh, my blade left a mark.

At last, he staggered toward Cynthia Larrabee, intending to take a hostage to shield his escape. He had waited too long.

I raced past my desk, exchanged stilettos for backpack and withdrew the sword from the concealed scabbard running down its back. With an aerial leap that would’ve done a ninja proud, I landed between the demon and his target, momentum carrying my sword arm through a perfectly timed arc. The demon’s head flew to the opposite side of the room while his body crumpled at my feet.

I leaned over the remains, cleaned my blade on his tunic and, pulling a vial from my pocket, sprinkled holy water over the body. Moving quickly, but carefully, I made my way back to my desk, stowed my stilettos, sheathed the sword, straightened my hair and resumed my seat. I looked up just in time to see the demon fizzle out of existence, along with all traces of his blood. The second hand resumed its circuit around the clock face and the final bell of the day rang.

Ms. Hockinson dabbed her handkerchief across her neck, looked up with a frazzled sigh, and called, “Class dismissed!”

I smiled to myself, stood and shouldered my backpack. Sometimes, being a hereditary demon hunter rocked. Too bad Grandpa would never know that his self-imposed breeding program had worked. He hadn’t attained his goal of a seventh son of a seventh son, but he’d gotten his ultimate desire: me.

Debbie Mumford specializes in fantasy and paranormal romance. She loves mythology and is especially fond of Celtic and Native American lore. She writes about faeries, dragons, and other fantasy creatures for adults as herself, and for tweens and young adults as Deb Logan.
View all posts by Debbie →
This entry was posted in Deb Logan, Excerpts and tagged Dani, demon hunter, fun with words, prompt openings. Bookmark the permalink.