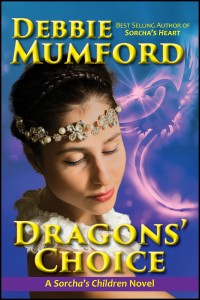 I mentioned a few weeks back that I’m a sucker for dragons. That may have been an understatement *lol* I LOVE dragons! So much so that I have an on-going series based on that love.

This week I’m giving you the opening of DRAGONS’ CHOICE, the first of a planned trilogy following the lives of Sorcha’s Children. This trilogy (DRAGONS’ CHOICE, DRAGONS’ FLIGHT, and the still-in-progress DRAGONS’ DESTINY) follows the continued adventures of Sorcha and Caedyrn’s family, as introduced in my novella SORCHA’S HEART.

AISLINN PACED THE EDGE of the heights, unable to focus on the majesty of the surrounding mountain range. Conflicting desires warred in her soul. Behind her, the community of dragons stirred to life, and her dragon-soul longed to fuse itself to her kin, never to be parted. But the suppressed humanity at her core dared her to leap into the clear, cold sky and soar to a destiny no dragon could attain. The desire, no, the need to metamorphose sang in her blood and sizzled in her bones. Her time had come.

She glanced down her long, supple body and admired the sparkle of reflected sunlight on her midnight blue scales. Long years had passed since she, or any of her sibs, had worn human form. She and her brothers and sisters had transformed often in their youth, both here in the ice aerie that housed the flight of dragons and in the castle down in the land of humans where their parents lived. The ability to shapeshift flowed through their essence, and they delighted in startling those around them, whether human or dragon, with unexpected switches.

But this was different. Aislinn had never attempted to put on her human form and remain in it. She ruffled her wings in anticipation.

“Are you certain, little one?”

Keeva’s question echoed through Aislinn’s mind and startled her back to awareness of her surroundings. Her human thoughts had so subjugated her dragon sense, she’d missed the sounds of her surrogate mother’s approach.

“No,” she answered truthfully. “I’m not certain of anything … except the pull within my soul.”

She faltered and gazed out over the jagged peaks of her beloved mountains, seeking solace in their familiar solidity. Humans might consider the mountains cruel and merciless, but to Aislinn, they represented security and peace. The range protected her home, the dragons’ ice aerie. She’d never lived anywhere else.

With a twitch of her barbed tail, she twisted her head to meet Keeva’s level stare.

The mauve dragon had been the first sight to greet Aislinn’s eyes when she’d hatched, twenty long years ago. Keeva and the rex had raised all six of Sorcha and Caedyrn’s children, and the unusual hatchlings had required all the ingenuity the mature dragons could muster. The impossible mixture of dragon and human blood had mutated the entire clutch into shapeshifters.

Aislinn and her siblings had hatched with the in-born ability — one they’d been unable to control until they reached fledgling status. Fledging dragons learned to fly; shape control became a necessary prerequisite.

“We can’t have you popping over to human form a thousand feet in the air,” the rex had warned them.

The desire — no, the need to fly had forced Sorcha’s children to gain mastery of their fluid bodies. But always, without exception, their true form, the one in which they spent ninety percent of their time, had been dragon. Now, Aislinn intended to reverse her natural inclination.

“I don’t know if I can do this, Keeva, but I must try.” She lowered her head, stretched her neck toward the mauve female and nuzzled her dragon-mother’s jaw affectionately with her forehead. “Will you give me your blessing, honored one?”

“Of course, Aislinn. My blessing and my love go with you wherever you fly.”

An intense spike of alien emotion stabbed Aislinn’s heart. She longed to throw herself into someone’s arms and weep. Definitely time to fly. Dragon’s didn’t cry — but humans did.

She spread her wings and hurled herself into the bright morning sky.

“Give my love to Sorcha and Caedyrn!”

Keeva’s final thought rang in Aislinn’s mind. Her wings caught the wind, and she arrowed toward the land of men.

Debbie Mumford specializes in fantasy and paranormal romance. She loves mythology and is especially fond of Celtic and Native American lore. She writes about faeries, dragons, and other fantasy creatures for adults as herself, and for tweens and young adults as Deb Logan.
View all posts by Debbie →
This entry was posted in Excerpts, Promotion, Writing and tagged dragons, e-books, fun with words, novel, prompt openings, Sorcha's Children, writing. Bookmark the permalink.