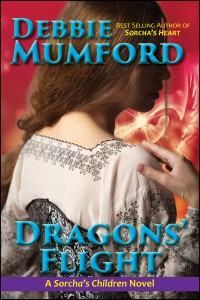 This week I’m giving you the opening of DRAGONS’ FLIGHT, the second in a planned trilogy following the lives of Sorcha’s Children. This trilogy (DRAGONS’ CHOICE, DRAGONS’ FLIGHT, and the still-in-progress DRAGONS’ DESTINY) follows the continued adventures of Sorcha and Caedyrn’s family, as introduced in my novella SORCHA’S HEART.

Brandubh, one of the featured shifters in this novel, is one of my favorite characters. He’s the family clown, but has much deeper sensibilities than he usually allows others to discern. His adventures in this story force him to step up and become the man … uhm, dragon … he’s destined to become.

NICTITATING LIDS SHIELDED BRANDUBH’S EYES from the lash of glacial wind. Air currents pushed against his wings, and he savored the effort his downstroke required. Joy welled in his heart as he fought the sky for dominance. He was dragon. A lord of the sky. He caught a stream of wind and relaxed his wings into the most advantageous angle to drift along its unseen course.

Moonlight sparkled on the ice below, turning the glacier of his homeland into a diamond-studded treasure. A hoard to tempt the soul of any dragon, but Brandubh was not any dragon. Brandubh and his five siblings were a race apart, a clutch of shifters born of an impossible love. Their father, a mighty black dragon named Caedyrn, had been the heir apparent to the Rex of the ice aerie when he lost his heart to a valiant human wizard: Sorcha.

With more courage than caution, their mother, Sorcha, had sought the Heart of Fire. She believed the legendary amulet would provide her people with protection from the ravages of dragon-kind. Unfortunately, Sorcha had neglected to count the cost of possessing an object of such power. The Heart of Fire transformed her into a pearly pink dragon — which led to the clutching of Brandubh and his siblings.

Created of a mix of human and dragon blood, the siblings had demonstrated their unique abilities within moments of hatching. The adults in their world had found it challenging to raise hatchlings who could pop from dragon to human to dragon in the blink of an eye, but the Rex and his assistant had managed the feat. The shifter siblings had been raised in the ice aerie under the watchful tutelage of the Rex because the Heart of Fire, in a display of dispassionate power, had returned Sorcha to human form forcing Caedyrn to choose between his species and his love. He chose Sorcha.

The Heart of Fire had condescended to perform a last act before vanishing from the mortal realm, the transformation of the black dragon into a dark-skinned, naked, human male. The clutch of eggs the ensorcelled couple left behind had been adopted by the Rex in particular and the ice aerie’s flight as a whole.

Brandubh wrested control of both thoughts and wing. Pulling out of the comfortable skim, he circled the aerie a final time and arrowed toward Glengorm. He’d been apart from Aislinn and Taran too long. The time had come to see if humanity fit him as well as it did his married sibs.

Married. He understood the human concept of wedded fidelity. After all, dragons bonded for life once they chose their mates, but Aislinn and Taran had chosen human mates. Brandubh liked Ewan, the Rossali prince his sister Aislinn had chosen, and Senga, Taran’s wife, seemed a nice enough girl, but they weren’t dragons, weren’t even dragon- shifters.

He didn’t understand how Aislinn and Taran could bear to mate with non-dragons. Why, Aislinn couldn’t even mind-speak her mate. Taran and Senga had overcome that barrier due to Taran’s innate wizardry, but even so, the alienation from all things dragon made Brandubh’s skin crawl.

Brandubh shook himself to clear his head and concentrated on his chosen path. He would fly to Glengorm, present himself in human form to King Leofric, and then visit with his parents and each of his human sibs. He was determined to hold human form for at least three months. His record to date was the fortnight he’d spent in Glengorm after Taran’s marriage, but that had been two years ago.

Though it seemed every eligible female in the aerie had expressed interest in him, he had yet to find a dragon he desired to fly. Perhaps he, too, was doomed to mate with a human. The time had come to discover his destiny.

Debbie Mumford specializes in fantasy and paranormal romance. She loves mythology and is especially fond of Celtic and Native American lore. She writes about faeries, dragons, and other fantasy creatures for adults as herself, and for tweens and young adults as Deb Logan.
View all posts by Debbie →
This entry was posted in Excerpts, Promotion, Writing and tagged dragons, ebooks, fun with words, novel, prompt openings, Sorcha's Children, writing. Bookmark the permalink.