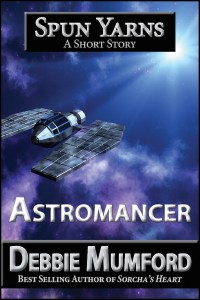 Alchemy…Alchemy…what should I write about alchemy?

I know! Let’s take something associated with the middle ages and fling it out into space. Yeah. That’ll be fun!

The resulting tale was Astromancer!

Here’s how the story starts…

WYOT WANDERED, AWE-STRUCK, through the serpentine halls of the Emerald Conclave. He’d dreamed of being invited into this building, into the prestigious gathering of Alchemists it housed, but he’d never expected his dreams to become reality. He was an astrologer of the third rank, possessed of nowhere near the innate magical talent required to join this august body.

He knew the way — when the Thrice Great called, he provided the knowledge — but Wyot took his time, absorbing every marvel as he walked. Who knew when he’d have such an opportunity again. The corridor sparkled, bathed in red-toned shafts of sunlight from the dwarf star of Rigil II. No matter where he looked, Wyot was dazzled. The walls were robed in gold, undoubtedly transmuted by members of the Conclave, while windows boasted crystalline panes from Luyten. Even the floor beneath his feet shone, consisting of highly polished marble from Barnard Prime. Priceless artwork lined the walls, showing scenes from every planet that was home to a Guild oracle…and since any planet without an oracle was isolated from the rest of the starfaring worlds, all were represented. And the statuary! He didn’t have words for the creative genius that graced the carefully crafted niches along his route.

The whip-crack voice calling his name pulled Wyot from a reverential inspection of an exquisite rendition of his homeworld, Eridani. He snapped to attention before touching fingertips to brow in deference to an older member of the guild.

“How may I serve, elder brother?”

“You may follow me swiftly,” replied the older man. Silver-haired and stern-faced, he wore his dignity like a cape over impressive robes of scarlet and midnight blue sashed with gold. “Your tardiness is delaying the business of the Emerald Conclave.”

Wyot’s heart hammered, unease zipped along his spine. The entire Emerald Conclave? What had he done? A meeting with the Thrice Great had been intimidating enough. “Apologies, elder brother,” he said, striding to position himself a respectful pace behind the older man.

In silence, they moved through the remaining corridors, coming to a halt before a pair of ornately carved doors. Soaring sixteen feet from floor to lintel, the doors were covered in gold leaf, their carvings depicted Alchemical symbols, formulas, and stylized representations of the Guild’s most famous accomplishments. Wyot stared open-mouthed at the gleaming surfaces, until his guide’s voice snapped him back to attention.

“When I announce you, walk to the center of the room and salute,” the man instructed. “Don’t fidget and don’t gawk. Whatever happens, don’t speak unless spoken to, and even then use as few words as possible. Do you understand?”

His guide gave a gentle push, and the right-hand door swung silently open. He stepped through and called, “Astrologer Wyot, excellencies.” He bowed, motioned Wyot inside, and then left, closing the door behind him.

As instructed, Wyot strode to the center of the room — easily identified by a sun surrounded by cleverly depicted orbiting planets, all inlaid in the marble floor. Once in position, he faced the conclave and raised fingertips to brow. Lowering his hands to his sides, he stilled mind and body and observed the leaders of the Alchemical Guild.

The conclave sat on a raised platform, behind a table spread with a snowy cloth; six men and five women. The Thrice Great sat in the center, a handsome man of indeterminate age — as befitted one who held complete control of the aging process. Dark hair, deep blue eyes, dressed in robes of saffron yellow trimmed with ocean blue. His fellows ranged on either side, men and women who appeared to be in the prime of their lives, dressed in rich fabrics, their eyes heavy with knowledge.

Debbie Mumford specializes in fantasy and paranormal romance. She loves mythology and is especially fond of Celtic and Native American lore. She writes about faeries, dragons, and other fantasy creatures for adults as herself, and for tweens and young adults as Deb Logan.
View all posts by Debbie →
This entry was posted in Excerpts, Promotion, Writing and tagged alchemy, fun with words, prompt openings, short stories, space flight, writing. Bookmark the permalink.