New Stories for May!

I’m pleased to announce that WDM Publishing has released two more of my short stories!  Cinnamon Chou: Space Station Detective introduces a new favorite character … and starts a series of science fiction stories for children, while A Walk with Georgia was written to immortalize a beloved pet. Both are available exclusively from Amazon.

I hope you’ll enjoy both!

Growing up on a space station when your mom is the commander and your dad is head of security is the best … except when your best friend in the whole universe is moving back to his home planet and you might never see him again. But Cinnamon Chou is determined to be a professional detective, just like her dad, so when that best friend’s pet Inarian goes missing just before his family is scheduled to leave, Cinnamon is on the case!

A WALK WITH GEORGIA 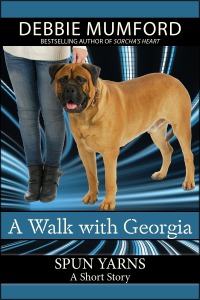 When a young woman takes her dog for a walk, she certainly doesn’t expect to fall through a wormhole in the space-time continuum. But when the unexpected and surreal happens, she must find a way home … for both of them.

Debbie Mumford specializes in fantasy and paranormal romance. She loves mythology and is especially fond of Celtic and Native American lore. She writes about faeries, dragons, and other fantasy creatures for adults as herself, and for tweens and young adults as Deb Logan.
View all posts by Debbie →
This entry was posted in Critters, Deb Logan, Releases and tagged Cinnamon Chou, Georgia, SFF, short stories. Bookmark the permalink.