Happy Anniversary to Us!

Today is my anniversary, so I thought I’d celebrate by posting a flash fiction romance … and a picture of me and my handsome hubby “once upon a time”! Enjoy 😀 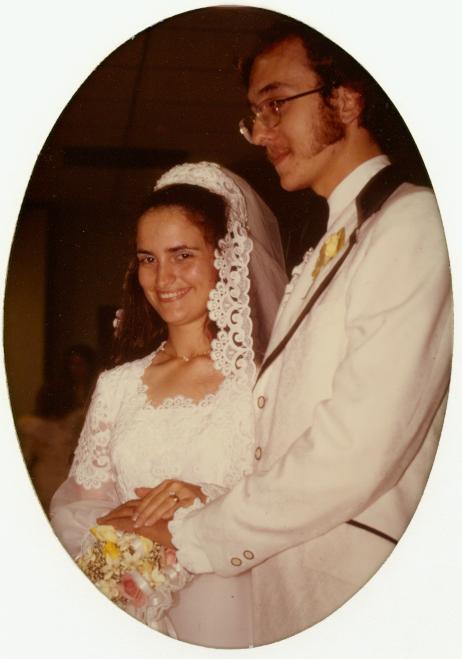 Rosemary loved moderating the Willamette Wizards chat group while fellow teacher, Amy Patterson, spent the summer in Europe. Especially so when she discovered that Kevin, a particularly intriguing member, had never been married and despised singles bars. When he began sending her messages outside the group, Rosemary’s heart sang.

Kevin says: Send me a picture?

Rosemary considered. Why not? At twenty-eight, she had nothing to hide. She worked out regularly and knew herself to be attractive, but she preferred to keep this exchange intellectual.

Consider it an exercise in imagination.

The cursor blinked rhythmically for a full minute.

Fine. No pictures. Meet me at the end of the summer?

A champagne-thrill sparkled up her spine. She hadn’t expected anything other than thought-provoking conversation from this moderator’s position.

Okay. How about a concert at the Coliseum on Labor Day?

As Labor Day approached, her anxiety level heightened. She liked the way Kevin expressed himself and enjoyed his humor, but what did she really know about him? A computer screen provided perfect anonymity. Rosemary had no way to judge the truth of his postings. With her heart on the line, she needed to test her intuition’s accuracy.

An idea blossomed when she spied Amy the first week of school.

“Amy,” she called across a flock of scurrying teenagers. “Welcome back!”

“Rosemary! I’ve been hoping to find you.” The young math teacher crossed to Rosemary’s classroom and stepped inside. “Thanks for keeping the chat group alive this summer. They’re raving about you. Would you consider joining us?”

“As a matter of fact ….” The sentence trailed off as Rosemary studied her friend. ‘Knock-out’ best described the curvaceous young woman. Honey blonde hair, bright blue eyes, and a fine-boned face. Amy could be a model. Instead, she pounded algebra, geometry and trigonometry into less than eager teenaged brains. If she was willing, Rosemary’s plan just might work. “Have you met Kevin? Face to face, I mean?”

The abrupt change of subject took Amy by surprise. “No, but I’ve been chatting with him for over a year. Why?”

“Let’s grab some coffee after school and I’ll fill you in.”

Kevin stood on the brick plaza before the Coliseum wearing a tux and holding a long-stemmed pink rose. His blue eyes glittered darkly as he waited for Rosemary to appear. God, he hoped this worked out. He’d waited a lifetime to meet a woman who matched him this well.

He recognized that he didn’t really know anything about this woman. Tonight he’d discover what she looked like, but more importantly, he’d learn if she’d been truthful in their chats. After all, he’d intentionally lied to her, implying he could barely make ends meet. In truth, his business success astounded everyone he knew, himself included. He prayed Rosemary wasn’t just another gold-digger.

He scanned the crowd for a woman carrying the mate to his rose. Not yet, but his eyes stalled on a curvaceous blonde with gorgeous blue eyes. The woman noticed the rosebud in his hand and glided toward him. He reminded himself to breathe as the golden-haired beauty stopped before him.

“I hope the lady is worth the wait,” she said in a husky voice, her gaze sliding from rosebud to tux, cummerbund, silver button covers and finally, his eyes.

His heart hammered as she flashed a sultry smile. He wrapped his mind around the thought of Rosemary’s sweet personality and clutched it like a life preserver.

The sexy blonde placed a business card between the fingers holding the rose. “In case you need company later.” Her hand lingered over his for a moment before she strolled away, casting a final smile over her shoulder.

Kevin watched the young woman disappear behind the glass of the Coliseum’s main entrance before glancing at the card. Blank on one side, the other carried a Coliseum suite number. He worked to regulate his breathing while reminding himself she hadn’t carried a rose. His evening’s agenda didn’t include anyone but Rosemary. He stepped to a trash container and deposited the card. Rosemary would come.

As he moved back to the center of the plaza, a middle-aged woman in jeans and an oversized denim work shirt caught his attention. Graying hair curled around a face lined with sun crinkles. She clutched a long-stemmed pink rose before an ample bosom. Kevin’s heart sank. He’d hoped for soul mate; this woman could be his mother.

Never mind. Rosemary’s friendship was a treasure. Glancing again at her casual attire, Kevin shrugged out of his tux jacket, removed the cummerbund and loosened his top button. An evening of fabulous music and great conversation waited. The lilt returned to his step as he covered the distance between them.

“Rosemary? I’m so glad to finally meet you!”

The woman met his eyes and smiled. “I’m glad to meet you, too, Kevin.” She laughed and her brown eyes danced with delight. “And I think my daughter, Rosemary, will be as well.”

Kevin gaped at her before stammering, “Your d-daughter?”

“She’s waiting for you in my company’s suite. Here’s your ticket.”

Rosemary’s long, dark hair whispered against her satin-clad shoulders as she turned to stare at the suite’s closed door. What happened? Had Kevin followed Amy? Had he bolted when he saw Mom? Had he spotted Mom and opted for Amy?

The silver lever of the door’s handle moved, pulling her from the suite’s leather couch. Her body tensed within the evening gown’s sapphire folds as the door swung open. A smile wreathed her face and she moved forward to welcome the man whose companionship she’d enjoyed all summer.

Their eyes met, locked, and she saw at once that the test had been unnecessary. As her students would say, Rosemary’s intuition rocked!

Debbie Mumford specializes in fantasy and paranormal romance. She loves mythology and is especially fond of Celtic and Native American lore. She writes about faeries, dragons, and other fantasy creatures for adults as herself, and for tweens and young adults as Deb Logan.
View all posts by Debbie →
This entry was posted in Family, Free Story and tagged anniversary, flash fiction. Bookmark the permalink.

2 Responses to Happy Anniversary to Us!