I’m thrilled to announce that the second novel in Deb Logan’s Prentiss Twins series in now available in both ebook and print formats! Here’s the scoop: 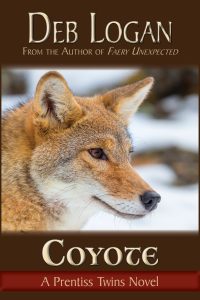 Debbie Mumford specializes in fantasy and paranormal romance. She loves mythology and is especially fond of Celtic and Native American lore. She writes about faeries, dragons, and other fantasy creatures for adults as herself, and for tweens and young adults as Deb Logan.
View all posts by Debbie →
This entry was posted in Deb Logan, Releases, Writing and tagged contemporary fantasy, coyote, middle grade, Prentiss Twins, thunderbird. Bookmark the permalink.